Designed for clamping the umbilical cord immediately after the birth.

Provided with grooves all along the length. 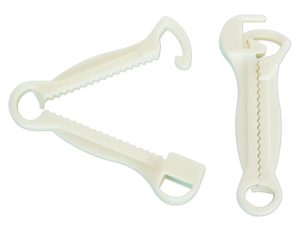 A lot of studies have shown that delayed umbilical cord clamping is better than the early umbilical clamping because delayed umbilical cord clamping is associated with a great haemoglobin concentration in the newborns and best iron storage between 3-6 months of life and less incidence for transfusion and neonatal hypotension. Experimental studies, executed on animals and humans, analysed cardiocirculatory changes in the foetus immediately after birth and the importance of the delayed clamping for the hemodynamic stabilization, particularly in the lowest gestational age.

In a recent randomized study conducted in Nepal on 540 newborns, birth by eutocic delivery with 39.2 weeks of gestational age, showed that delayed umbilical cord clamping after 3 min of life is correlated with a better haemoglobin level and less incidence of anaemia at 8 months of life. Zhou et al. conducted a meta-analysis that included hematologic parameters obtained by umbilical cord, placenta and newborns blood.

Despite evidence of beneficial effects for delayed umbilical cord clamping after eutocic delivery, this practice is not yet taken into consideration after elective Caesarean Section. The aim of the study protocol is to investigate the effects of the clamping after 1 min from birth by elective Caesarean Section on heart rate, saturation, body temperature, bilirubin, haematocrit and glycemia.